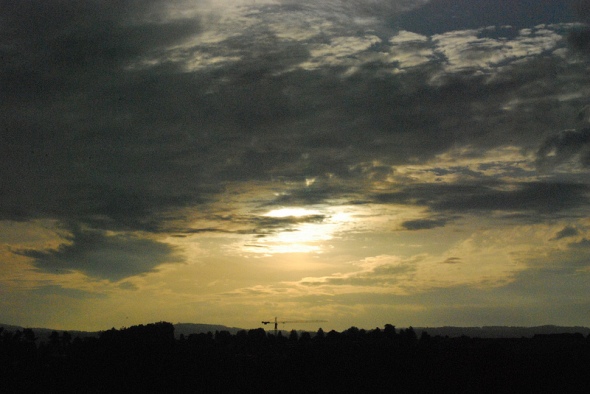 The Venus Transit on June 5 and 6 was a historical event in astronomy. It will take 105 years to repeat itself. Unfortunately, I was not able to view it in the sun, although the transit was observable in Zurich, Switzerland, after sunrise at 3.31 GMT (5.31 MET summer time) until 4.49 GMT (6.49 MET). First, it was cloudy. Second, I didn’t have suitable sunglasses. Whoever wants to be prepared for 2117 should consider welder glasses with filter no 14. Without such equipment you could watch the event even closer through live transmissions by observatories. I highly recommend the images collected by NASA’s “Solar Dynamics Observatory” (SDO). Watch the impressive three-minute-clip on NASA’s YouTube channel.
I did not witness the transit myself. Nevertheless it was a thrill to be aware of it, to feel the moment and know that the Sun, Venus and Earth are on a straight line. And to take a snapshot of the sky in that special moment.

This entry was posted on June 6, 2012 by Chrislex. It was filed under Colours, Flickr, Moments in Time, Transitoriness and was tagged with 2012, clouds, earth, Erde, Gerade, Himmel, June, line, sky, Sonne, sun, Transit, Venus, Venustransit, Wolken.